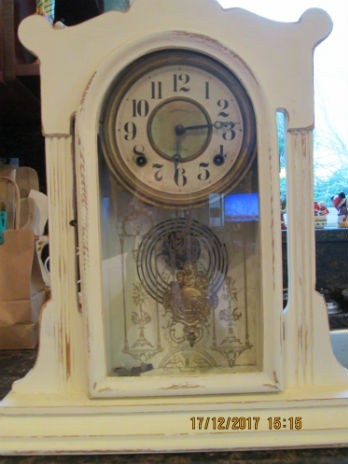 On small business Saturday, I acquired the clock on the right at a store that sold vintage items along with other items that the vendor hoped would become Christmas presents.  It is not the most impressive clock in my collection of clocks but there was something about the unusual shape of the clock that was appealing.  My wife thought it was a beautiful clock and she included the clock in her Christmas decorations by our dining room table.  The clock does not run but the chiming function works if you move the hands past the top of the hour.  We felt the $62 asking price from the owner was reasonable for such an unusual shaped clock.

Facts about this clock.

The clock we purchased is an Ingraham Eight Day Clock.  The brand name and the words Eight Day are visible on the face of the clock.  My next move was to search for “Ingraham Eight Day clocks”.   That search returned several sites dealing with the history of the Ingraham Clock Company.  The company has existed since the early 1830’s and continued making clocks until 1967 when the company was sold to McGraw-Edison and the clock factory was converted to a factory making fuses.

History of the Clock Company

There were a couple of things I learned while studying the history of this clock making company.  First, the company did not make their own clock movements.  The movements they used were purchased from other companies until 1865 when the company began making it’s own movements.  This company is most known for creating unusual cases for their clocks.  The company won 17 patents for clock designs between 1853 and 1873.  As a retired CPA, I am interested in business operations.  The second interesting thing I learned about the company was the number of partnerships and name changes used by the company.  Between 1844 and 1885, the company operated under six different names as a result of partnerships with other organizations or individuals.  I would suspect raising capital was a reason for all the business name changes but I have not seen anything in writing that mentions a reason for all the different partnerships.  All of the name changes does make it easier for a clock collector to identify the age of an Ingraham clock.

The different company names help identify the age of the clock because the name of the company was typically stamped into the back of the clock movement.  There are also a series of numbers stamped on the front of the movement that help identify the age of the clock.  The first number (or two numbers) represent the month and then the last two numbers represent the year.  For example, if the number on the front was 275, that would mean the clock was made in February 1875.  In some cases accessing the back of the clock movement is easy.  I found a video on Youtube, that showed an Ingraham clock with a moveable disc on the back that would then expose the movement.  In the case of my clock, there is no way to access the movement without taking the entire back off the clock so I have not been able to learn the date my clock was made.

One of the later patents granted to the company was for a process of applying black paint to wood that produced a marble like finish for the clock.  This patent was granted when the founders son was running the company.  Using this patent, the company produced clocks in more than 200 designs into the 1920’s.  The clock used as an example in the Youtube video I mentioned earlier is, I believe, an example of a clock with this black finish.  You can see this video here.

More about my clock 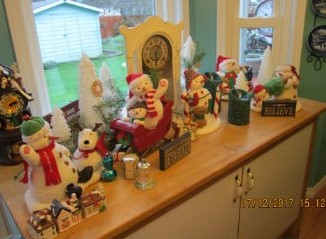 The clock we purchased has an off white or antique white finish.  This finish was probably applied by an earlier owner.  I found an example of the clock among google images that shows how the clock would have looked when it was new.  You can see that image here.  If you search for Ingraham clocks on Ebay, you will find several for sale.  I found prices ranging from about $30 to near $100 for clocks subject to bidding.  Some of these clocks were idenfied as parts clocks, meaning the clock itself did not work.  Since I have not taken my clock apart to determine the age of the clock, I am not sure if the clock I own would be more or less valuable than the clocks found on Ebay.

Getting back to the original topic of this post, finding the history of a specific clock, I have to conclude that there is no site on the web that can provide you with the history of a clock that you might purchase.  You can find plenty of history on the companies that make clocks and find ways to date the manufacture of your clock but not it’s history.  If I wanted to know the history of my clock, I would have to learn the identity of the prior owner and reach out to that person.  Even that would only provide information for the time that person owned the clock.  Tracing the history prior to that owner would be even more difficult.

If your are reading this information and know of a place where the history of a clock can be learned, please share that information by adding a comment below.