From the 1600s to the early 1900s, most clocks operated using a pendulum to move the parts within the clock and turn the hands on the clock face.  Pendulum movements began to be replaced by quartz movements in the 1930s.  The first quartz clock was developed as early as 1927 but the technology was not widely used for consumers until the 1960’s when advances in science made the technology available for watches and smaller clocks. 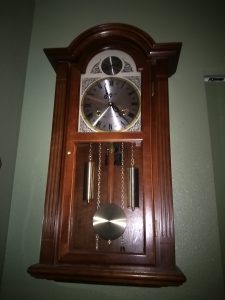 Pendulum movements rely on a consistent swing back and forth of the pendulum to move the clock parts at the same speed to provide accurate timekeeping.  Between the 1600’s and the 1900s, there were a number of developments in clock technology that made the clocks increasingly more accurate.  Early metals were affected by changes in temperature.  As better metals have become available, pendulum movements have become more accurate.  Most of these clocks depended on a metal spring to be wound to provide the power for the pendulum.  These springs have become much better with newer metals again adding to the accuracy of the pendulum clocks.  The newer metals also made smaller home size pendulum clocks practical.  While I was researching material for this article, I came across an article about a clockmaker named John Harrison who designed a pendulum clock movement 240 years ago that he claimed would be accurate to within one second over a 100 day period.  His claims were proven to be true in 2015.  You can read the article here: http://wornandwound.com/the-24…

Pendulum movements, even in the most expensive clocks, will not function properly if the clock is not on a level surface or hung on a wall so the clock is level.  Level means not only level side to side but also front to back.  If the clock is not level, the normal ticking of the clock will not sound right.  Pendulum clocks are also affected by gravity.  If a clock is adjusted to keep accurate time at sea level, it will not be as accurate if it is being used in the mountains.  Gravity affects the swing rate of the pendulum so the higher elevation will cause the pendulum to swing at a different rate than at sea level. 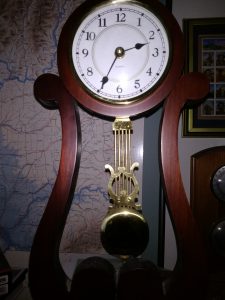 Today most clocks and watches come with quartz movements.  These movements operate with a battery and eliminate the need to wind a clock or watch so the clock should never stop until the battery dies.  With the development of semiconductor digital logic in the 1960s, it became possible to create small-sized quartz clock movements but it was during the 1980s that quartz movements began to dominate the world of clocks and watches.  Quartz movements result in very accurate timepieces because they are not sensitive to gravity and temperature changes do not result in significant gains or losses of time.  I have seen a statement that quartz movements work best in a temperature range of 77 to 82 degrees Fahrenheit (25 to 28 degrees Celsius).  The same article indicates a temperature change of minus 10 degrees Celsius would result in a time loss of 110 seconds in a year or not quite 2 minutes per year.  If you compare that to most wind up clocks or watches, that is indeed quite accurate timekeeping.  The quartz clock example shown has a pendulum.  It should be noted that this is purely decoration.  The clock will operate even if the pendulum is not swinging back and forth.

Most collectors prefer clocks with pendulum movements because you can open the clock and look at the internal mechanisms as they function.  Clockmakers warn you that if you open a quartz movement, you will destroy the movement and have to buy a new one.  Interaction with a quartz movement is limited to changing the battery.  Pendulum movements do need maintenance.  Because the mechanisms are made of metal and are constantly moving, they wear and they become dirty.  If you are a new collector of clocks or are thinking of becoming a clock collector, you will have to make a decision about what movements you want to have to power your clocks.

While this is a simple and brief look at the two major clock movement types, if you wish to add comments or clarify the information, please feel free to add your comments below.