I do not have a large collection of pocket watches but I keep coming across interesting ones that I add to my small collection.  My most recent addition is a Railroad Watch by the Le Jour Watch Company.  I identify it as a railroad watch because it has an inscription on the case in French that translates to mean Real Railroad Watch.  I am now using this watch as my everyday timepiece.

Why a Pocket Watch

I am retired so I am able to wear jeans the majority of the time.  The Lee jeans I buy have a small pocket within the right pocket of the pants that is a perfect fit for a pocket watch.  I retired a British made pocket watch that also had a train picture on the back when I acquired this watch.  Pocket watches were the favorite timepiece for men from the time they were first created around 1510 until World War I when war conditions led to the development of the first wristwatches.  A couple of my pocket watches were inherited from relatives and I have long thought they were much classier than a wristwatch.

Where did I find this watch

This watch was purchased in New Mexico at the Rio Grande Gorge bridge from a vendor in the parking lot.  There are a number of vendors that set up shop in this parking lot hoping to attract business from the people who come to view the bridge and the Rio Grande river.  The bridge is located outside the City of Taos.  We visited on a weekday and still found the parking lot nearly full of vehicles.  My wife found the watch while I was on the bridge with friends.  She was attracted to the watch because it has a picture of a train on the back side of the watch and because of the French inscriptions on the front and back of the case.  She knew I had lived in France as a teenager and would enjoy this watch.  The front and back of the watch are pictured to the right of this text. 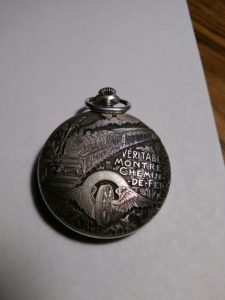 Is this a real railroad watch

Just above the second hand is the name Le Jour.  I found that this company began making pocket watches in the 1960s and did so until some time in the 1980s.  There is information that suggests the brand name has been sold to other companies and those companies are making watches using the Le Jour name.  You can still find a Le Jour watch site on the internet but there are only wristwatches listed for sale.  Just below the Roman numeral for 12, there is the word Ancre within a circle surrounding 1A and below the circle is the words Patent Railway.  The watch face has Arabic numerals to designate the hours beyond 12 up to 24.  Surrounding the Roman numeral 18 are the words Swiss Made.  I have not been able to determine if this pocket watch was made by Le Jour or another manufacturer using that name.

How old is this watch

This watch is a mechanical watch wound using the stem.  That mechanism might suggest this watch could date from the 1960s.  Since I paid $125.00 for the watch, I doubt it is that old.  I have been unable to open the back of the watch since I do not have watchmakers tools.  With the back removed, I might be able to find a serial number and then be able to determine the real age of the watch.  However, there does not seem to be a serial number database for the Le Jour watch company.  I have been unable to find much information about the company on the internet.  Most of the information is on the sites of companies that are now selling the wristwatches and amounts to nothing more than a few sentences about the history of the company.  If anyone who reads this article happens to know where more information can be found, I would appreciate your adding a comment with the information.

Having fun with a new watch

I hope you have enjoyed the little bit of history I have shared about my new pocket watch.  It is an example of how you can have fun trying to learn something about a timepiece you have recently acquired or that has been sitting in a drawer for a period of time.

One thought on “Railroad Pocket Watch by Le Jour”