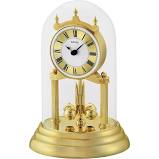 What are Anniversary Clocks

Anniversary clocks are also known as 400-day clocks or torsion spring clocks.  These clocks apparently became known as anniversary clocks because they can run for a year or more on one winding and are frequent gifts to commemorate special occasions like an anniversary.  The movement uses a torsion pendulum which is a weighted disk that has ornate balls on spokes.  The pendulum rotates clockwise and then counterclockwise to power the clock.  It takes less power to operate the pendulum than the power needed to operate a conventional clock and this is what allows the clocks to operate for long periods of time without being rewound.  These clocks have been popular because they had glass or crystal covers that allowed a person to observe the rotation of the pendulum and admire the beauty of the faces and other parts of the clock.  The example at the right is a modern clock from JCPenny.

As is the case with most clocks today, anniversary clocks now come with quartz movements and are powered by batteries.  There are also versions that chime or play music.  Many of these clocks have plastic parts and synthetic materials where the original German clocks are all brass.  The clear covers may be made of plastic rather than crystal as was the case with the original German clocks.

The invention of the torsion pendulum is credited to a man named Robert Leslie in the year 1793.  The first clocks using this mechanism are credited to an American inventor named Aaron Crane in the year 1841 but his clocks apparently were not good sellers.  A German man named Anton Harder then patented torsion clocks in 1879 or 1880 but his clocks did not keep accurate time and he sold the rights to a company in Amsterdam, Holland but this company allowed the patent rights to expire allowing other German companies to begin making the clocks.

Keys to Successful Operation of these clocks

These clocks were often poor timekeepers because the torsion springs are affected by temperature.  When there are radical changes in temperature, the spring tension changes and the clocks would not keep accurate time.  It was not until 1951 that a temperature compensating spring was developed resulting in anniversary clocks that were able to keep accurate time.

Another critical factor in the operation of anniversary clocks is the surface on which the clock is displayed.  The surface must be level.  There is usually a small circle at the bottom of the clock to keep the torsion pendulum from moving too much when the clock is moved.  If the clock is not level, the pendulum will touch the edge of the circle and the clock will not operate.  Most clocks come with leveling feet that can be adjusted to make the clock level.  I made the mistake of choosing a surface that was so slanted the leveling feet would not allow me to level the clock and I had to make shims to level the clock.  While this worked, the shims showed affecting the beauty of the clock so I ultimately moved the clock to a different location.

When is a clock considered an antique

I have always understood that an object that was more than 50 years old could be considered an antique.  While researching information on clocks, I have seen the term “vintage” used frequently and also the term “collectible”.  I found an article on one of the clock sites addressing the use of these terms and providing a definition of the terms.  According to this article, a clock is not considered an antique until it is more than 100 years old.  A clock is vintage if it is between 50 and 100 years old.  The term collectible only means the clock is hard to find.  When you are looking at clocks for sale on sites like eBay or Amazon, there is no guarantee they are using the terms according to the definitions provided above. 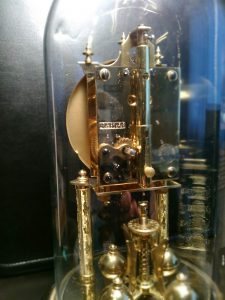 I began looking at the terms antique and vintage because my personal anniversary clock was made in May of 1964.  By my personal definition of an antique, I considered the clock an antique.  Now it appears the clock falls into the vintage category.  My personal clock was made by Schatz a German company that has been making anniversary clocks since the 1880s.  On the back of the clock, there are two dates.  First, on the left side, the date the clock was made in the form of one number for the month and a second number representing the year.  Then on the right in a circle that includes the company name is the number 49 which represents the year the company designed the movement used in the clock.  In the company catalog, this clock is described as a Schatz Standard Round Silver Dial 400 Day Clock.

There are a number of German companies that make the anniversary clocks.  Most have some method of identifying the year the clock was made.  If you are thinking of buying a vintage anniversary clock, do some research on the internet to learn how to identify the real thing before you buy.

If you have information to share about anniversary clocks, I would love to hear your stories and see pictures of your clocks.